Miss Van in the Lower Haight 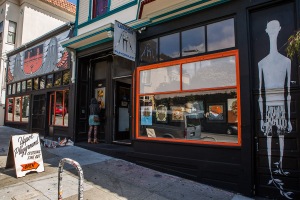 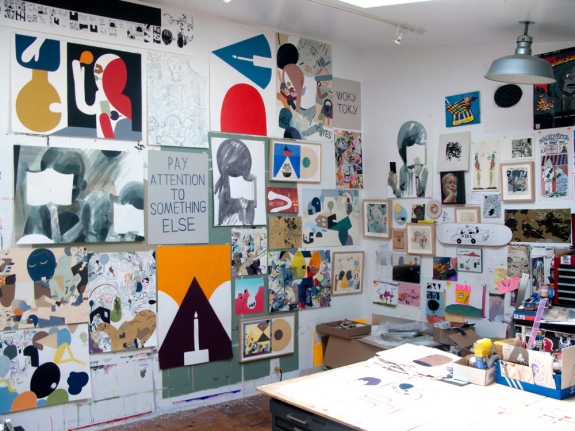 A little Sunshine in San Francisco before the rain comes 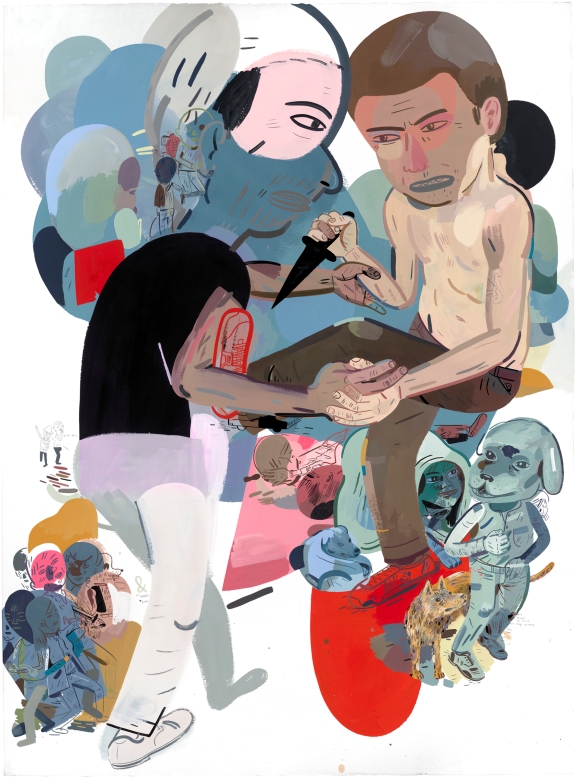 Jason Jagel has always been one of our favorite artists, even before we knew who he was. We saw the MF Doom covers, and became fans of the images, the style, the whole package. It wasn’t until later, when we received his beautiful mongraph, 73 Funshine, that we pieced it all together and realized the man making these paintings was also the man behind the album covers. It all made sense.

With Jason’s new show, I’ll Fly (Into Your Heart), opening at FIFTY24SF Gallery on April 1st, we get a few words in to Jason about more broader subjects of his art and career. The specifics of the show come in Part 2. —The Citrus Report

Thanks to all who came by plane, car, Muni, bike, skateboard and foot to see David Choe’s “Character Assassination”. If you were not at Fifty24SF last Friday this is what you missed. The private view kicked off at 5. The sold pins began to cover the walls. The line stretched down Fillmore. As doors opened at 7, the gallery came to life as eager admirers spilled into the room. The walls were filled with original paintings, sold out prints and intimate backdrop photos, revealing an artistic evolution of comic characters to iconic figures. Faces lit up and cameras snapped away. As Choe arrived the crowds inside and out jumped at the opportunity to meet the man in the bright pink shirt. Many fellow Upper Playground artists joined in attendance. If you happen to have missed the reception, “Character Assassination” will hang through March 24th.

“Character Assassination” A sneak peak, you know you want it….

Check out some shots from the set up for “Character Assassination”… 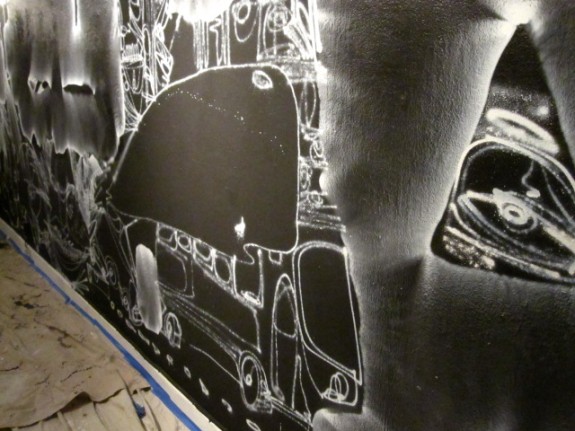 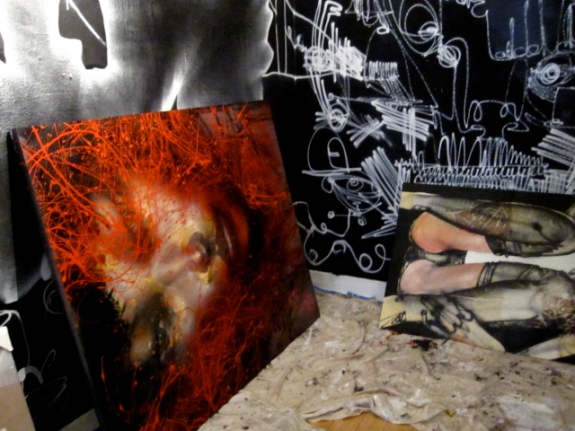 The week before an opening reception is an interesting time, we all start to feel the pressure of the countdown, the artist gets final details harnessed, and we get an intimate look at how he/she functions in a studio environment. Late nights painting the gallery walls, hanging work, and shootin’ the shit, we are regaled with stories of travel and adventures and we learn more clearly why we love these guys. In a nut shell, it’s the time when we re-affirm our obsession with art. Choe is no exception. 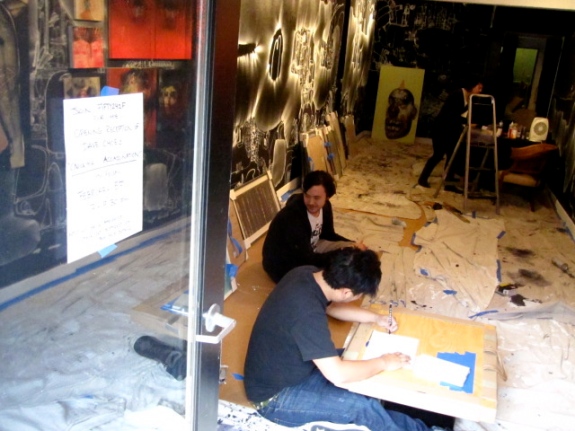 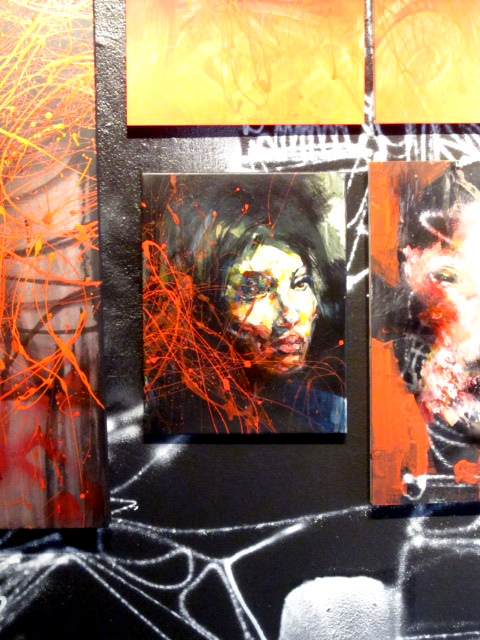 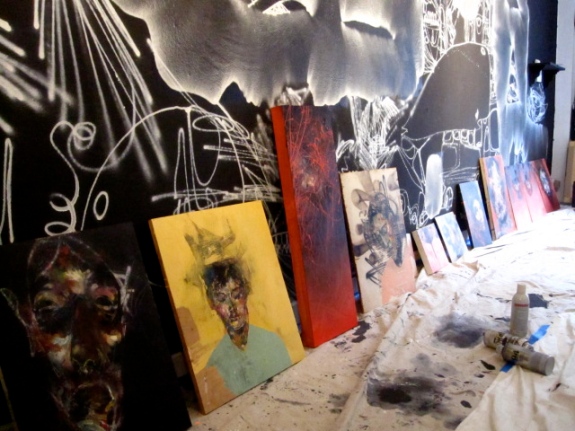 Not to be missed, Choe returns to the bay area after almost ten years with a collection of new paintings and a plethora of sold out prints. 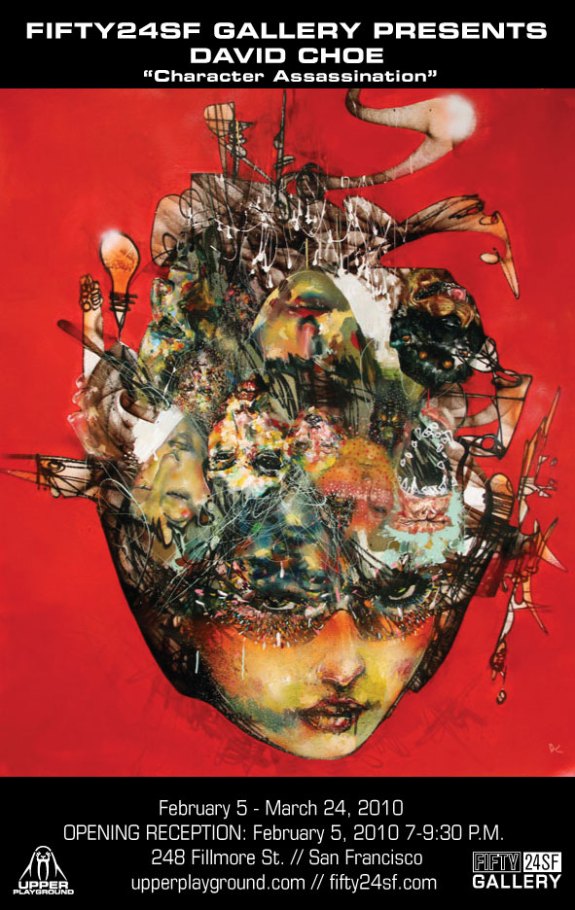 Fifty24SF is proud to host “Character Assassination” – a solo exhibition by David Choe.

One of the most diverse and prolific living artists, David Choe combines his interest in American and Asian pop culture, graphic novels, and cityscapes to produce some of the most dynamic work seen today.

His often lewd expressions of the female form, considered offensive to some, is, in all actuality, the most raw and honest appreciation of the male/female sexual interaction. Erratic brushwork and wild compositions convey a superficial sense of anarchy and abandon while the delicate and exotic portraits betray the implied chaos, revealing a passionate love of women.

In Dave’s work, discordance and serenity exist in impossible harmony as proof to the truest constitution of life. His paintings are testament to the fact that the gritty and the perceived offensive are necessary constituents of raw beauty.

David’s disinterest in social conformity and lack of need for social approval allows him to exist in a realm of indulgence, allowing his creativity to abound unfettered. Whether he be painting murals, paintings, or quick street commentary, that raw honesty is the element that drives his work deep into the psyche of the viewer.  Truths that we as an audience are not always brave enough to admit, even to ourselves, fuels the mastery behind the work.  A subliminal stirring of still waters, his paintings are thought provoking and engaging in a way that cannot always be justified as simply, aesthetically pleasing.

A seasoned globetrotter, David Choe’s murals cover walls from his native Los Angeles to Vietnam. His intricate brush strokes and characters translate well to consumer products and he has worked with Marvel Comics, Levis and Nike. His art, photos, and writing have been featured in Giant Robot, Hustler and Vice Magazine. David Choe has also self-published comic/journals: Bruised Fruit, Cursiv and Slow Jams. Most recently, he was featured in the documentary about his work “Dirty Hands.”